I stop to catch my breath and look up. Above me the summit of El Toro looms. Today me and my partner Zach are going to reach it. Our route? Timewave Zero, formerly the tallest bolted line in North America. Towering at 23 pitches and 2,300 feet, it’s around the size of Half Dome. We have woken up at 5:30 am to begin climbing, and are currently on the hike up to begin. Or plan is to be done with the climb and down in time to scoop a couple cappuccinos at El Buho. In retrospect this plan is highly ambitious.

I’m mainly a single-pitch sport climber. I’ve dabbled in most forms of climbing, including some misadventures in the alpine, but for the most part I remain unfamiliar with the systems we will need to get up and down beyond not getting myself killed. Therefore, I’ll be relying upon Zach for his knowledge. We’ll be doing a technique on the way up called “simul-climbing.” It allows both climbers to climb at the same time, instead of one climber belaying and the other climbing. It’s a great time saver when moving over easy terrain, but a bit more dangerous if done wrong. I’ve never done it before and the prospect is intoxicatingly exciting and terrifying.

Huffing and puffing we finally arrive at the base of the wall and search for our route. I shuffle along the cliffline and look for something familiar. “Alright, let me look around.” I say. “I haven’t been up here in a couple years.” It’s an easy find. There’s literally a metal nameplate at the base. “Timewave Zero.” Accompanying the route’s nameplate is another one memorializing a climber who died on the line years prior. It’s a great sight to start our day.

We throw our backpacks down in the dirt and begin gearing up.

“Ok Zach, run me through the system.” I say. “And I’ll ask you to remind me again once we get to the part where we actually simul.”

Zach removes a couple devices from his rack and shows me each one. “So I have two different devices. This is a Climbtech Rollnlock, and the this is a Petzl Micro Traxion. So what you do is clip the locker directly in a bolt or a chain or whatever. Lock it the biner, and then before you lock in the trax put the rope through.”

I reach out and take each one, and play with the mechanisms. “Ok, so it’s kinda like a gri gri. You put it in and then close it”

“Yeah. See inside this one?” He points at the diagram of the little climber on the device. “Load, hand.”

He pulls his rope out of his backpack and begins to flake it. We’ve elected to take his instead of mine. “Wait, so explain to me what’s so special about this rope?” I ask.

He holds up a strand of it. “There’s this layer of glue. If the sheath gets cut, it normally exposes a big old section of core. But the glue just keeps it covered.”

“But thats the coolest part of when a rope cuts though!” I exclaim. “When it just explodes! That’s what you want.”

“You seen that video of the dude falling on the gritstone and his rope cuts?”

“Oh dude, he like falls like across this arete and his rope grinds down the arete, and then you see the sheath cut and the core snaps and he falls.”

We rack up and sort our gear. I carefully organize what I’ll need into the different loops on my harness. Everything seems good and in order. The rest of my gear I’ll need will be in my daypack on my back.

“Ok, so basically I’m just gonna start climbing and kinda communicate with you.” I say. “You’re gonna be on a grigri behind me and managing the rope, but I’ll also make sure I’m not climbing slower or faster than you. And once I start running low on draws I’ll be like, ‘yo I’m getting low on draws,’ and I’ll find an anchor station and put you on belay, right?”

“Is there virtue to running things out while we’re simuling to save gear?” I ask.

Zach laughs. “Yeeeaah. For sure.”

He peers at me. “Just don’t put yourself in a position to take a whipper that’s gonna break your leg and make me have to rescue you.”

“Yeah I am not planning on dying today.”

“I used to be cool with dying rock climbing. But now I only wanna die during the revolution.” I say.

Zach laughs. “Yeah. I’m not real stoked on either to be honest. I don’t really want to die of old age either.”

“Yeah. You kinda wanna die in your 70’s from an accident of some sort. That’s the true way. Like die in an alpine accident when you’re 75.”

“Yeah my grandpa is getting pretty old. He’s 78. He’s still going to be president though.”

Views of the other side of the canyon on the way up.

Ripping off my goddamn harness upon summiting.

Beautiful exposure about half way up.

The final scramble to the summit. 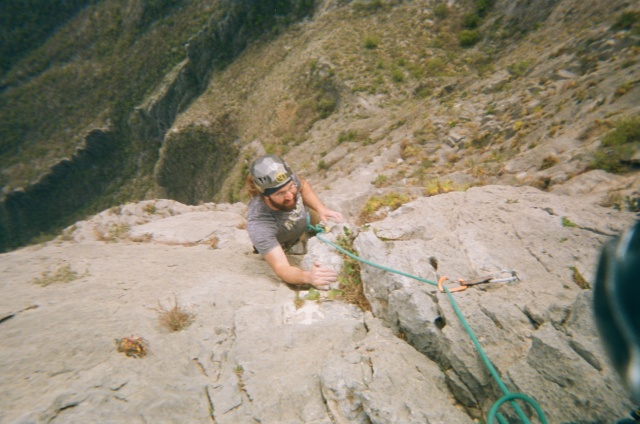 In retrospect maybe climbing past the bevy ledge instead of taking a break was a bad call. 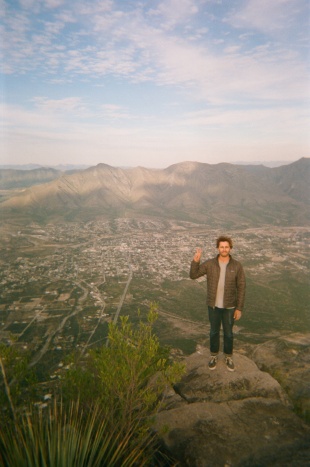 Around ten hours later we finally reach the summit. My feet hurt so bad I am almost crying with every tiny edge I stand on. Our dreams of cappuccinos dissipated far behind us on the wall. We elect to spend thirty minutes at the summit since we will be rappelling into the night regardless. From where we are we have a panoramic view of the Sierra Madres. It is absolutely mesmerizing.

A few hours into the climb I wanted nothing more than to give up and come down. In retrospect, it was probably one of the best days of my life.